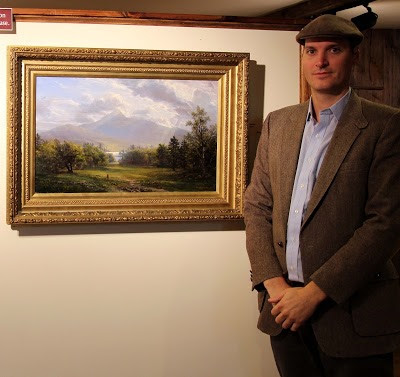 Join us for a special presentation by award-winning plein air artist Erik Koeppel of Jackson, New Hampshire, as our major summer exhibit, “Art as Antidote: White Mountain Landscapes,” comes to a close. This free event will begin in the Twitchell Education Center, where Koeppel will share his thoughts on the influence and power of art as an antidote to our times using several of his recently completed art works (which will be for sale) as examples. A visit to the "Art as Antidote" exhibit will follow.Erik Koeppel (b. 1980) was born in Oregon, and spent his childhood moving with his family through many of the most beautiful landscapes of North America—from the Rocky Mountains, to Southern California, to the Appalachian Range. At the age of ten, his family settled in the White Mountains of New Hampshire, where he drew obsessively from nature, and began to develop a love for the expressive potentials of traditional representation. Erik received his formal training from the Rhode Island School of Design followed by the New York Academy of Art, and an annual apprenticeship in Wiscasset, Maine, with his professor and friend, Seaver Leslie. After copying extensively from the Italian Masters, he developed a body of work that has been exhibited and collected internationally, and represented across the United States. Koeppel’s mastery of traditional techniques has led him to become one of very few young contemporary artists whose work is regularly exhibited with historic masters of the 19th and early 20th Centuries. His work has hung beside Thomas Cole, Winslow Homer, Edgar Degas, John Frederick Kensett, and George Inness, and he has had the distinguished honor of entering permanent collections including artists of this caliber. American Artist, PleinAir Magazine, and other respected publications have covered his progress. Koeppel is a member of the esteemed Guild of Boston Artists.